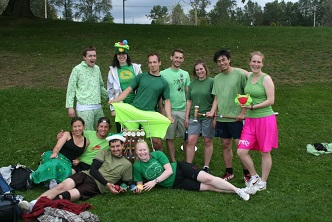 Elimination 8s was a smashing success this year!  Thanks to all those who came out and made it such a memorable day.  Particularly all of our volunteers and sponsors who were instrumental in running the raffle, which raised more than it ever has in the past.  Special thanks to the VUL who donated our grand prize.

This year's tournament was won by G-Raff A-ttack who elected to donate their share of the winnings to the Canadian Cancer Society.  The spirit winners were the Protectors of the Human Race, who have donated their portion to the Elevation Project.  The tournament organizers have selected Ultimate Peace as their charity of choice this year and we were pleased to have donated more money in total this year than ever before, primarily due to the effort of our raffle ticket sales army of volunteers!

Thanks to everyone, and congratulations to the winners!  We look forward to seeing you all next year,
- Rob & Kat