Greetings VUL members! I’m writing to summarize recent changes with professional ultimate in Vancouver, and to ask for your feedback.

After reading this article, if you have any opinions about pro ultimate, please complete our short questionnaire by February 23. We will take your responses into account when making future decisions.

Late last fall the VUL was evaluating our partnership with the Vancouver Riptide. Some concerns about the AUDL had become more prominent in 2017:

See "A Brief History" below for more background on the partnership and more detail on these 3 points.

However, in late December the owners of the Vancouver Riptide suddenly announced they were moving the team to Portland. This came as a surprise to us! Earlier in the fall the Riptide had announced a new local co-owner (Joshua Perina from Victoria), and we were discussing what a renewed partnership might look like with him. We were pleased with the inclusive and active approach that he was planning to take, and were curious to see how an engaged local owner would help the Riptide grow. However, that is all now moot, as L2 Sports Management and the AUDL decided to not continue any further.

Last month the pro scene changed yet again. Todd Curan, owner of apparel company Savage Ultimate, announced that he was creating a new league focused on gender equity called the United Ultimate League. The league will be 6v6 with a 3:3 ratio,  and there will be observers instead of referees. The league is also sanctioned by USA Ultimate.

The UUL plans to start operating in 2019 in the Eastern US, with expansion plans in 2020 that include Vancouver.

All of this is contingent on a successful Kickstarter campaign to raise $50,000 by February 28 for their first season. If they reach a stretch goal of $150,000, they’ll start operating in Vancouver in 2019. If you feel drawn to contribute, please let us know in our survey.

Tell Us Your Thoughts!

There are currently no pro ultimate teams in Vancouver, but the UUL plans to expand here and the AUDL could return. Please complete this short survey to let us know your thoughts on pro ultimate to help us with our future decisions!

For those curious to know more....

Six years ago, the world of ultimate entered a new phase with the launch of the first semi-professional league, the American Ultimate Disc League (AUDL). A second league, the Major League Ultimate (MLU), started the following year. The MLU ceased operations in 2016, but the AUDL grew from 8 teams in 2012 to 24 teams in 2017 in the US and Canada.

In early 2013, the VUL debated whether to partner with the first pro team to arrive in Vancouver, the MLU Nighthawks. We considered a number of opportunities and risks related to the MLU and a partnership. 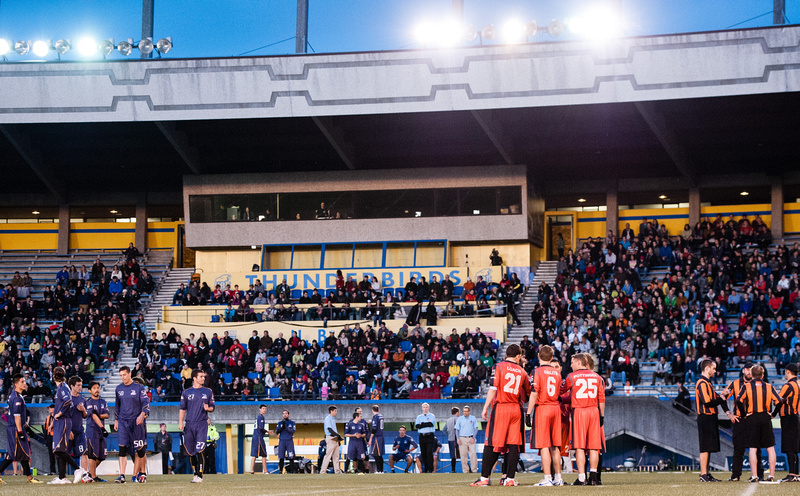 The opportunities were compelling. We also felt the best way to manage any risks was to partner, as we would have more influence with a seat at the table than by not partnering at all. We formed a partnership with the Nighthawks in 2013, and added the AUDL Riptide when they arrived in 2014.

The effect of referees has been mixed. We’ve read some reports that spirit and respect between players is lower with the presence of the referees, whereas others say there is no difference at all. As for rules, we’ve seen some confusion in a few of our youth programs.

Marketing benefits were limited to start as most spectators were existing VUL members. However, this is shifting as AUDL teams are increasingly targeting families for attendance. The AUDL is also having an impact on the sport community and youth especially, as highlight videos are shared online and broadcast by ESPN, and youth look more and more to AUDL players as models for play.

We also set a new direction. At the end of 2016 we launched a new 5-year Strategic Plan with 4 Pillars (Youth, Adults, Regional, Leadership) and 6 Foundations. This plan is less focused on growth than our previous plan, but does include a strong focus on youth players & coaches, and objectives to improve inclusivity and gender equity.

In November at the Ultimate Canada Conference, one session focused on whether Ultimate Canada should form an expanded partnership with the AUDL. The AUDL’s use of referees and lack of gender equity received the most attention in that session. Many attendees expressed strong concern about AUDL’s approach, and the potential negative impacts on players and the sport if changes were not made.

In December, 150+ elite players signed a statement promising to boycott the AUDL if the league did not ensure gender equity in 2018. The statement read:

“I believe that women and men should have equal representation at the highest, most visible levels of our sport – including professional play. If the AUDL does not ensure that women and men have equal representation in 2018, I will not support it. This means I will not be playing in or attending games, and will avoid consuming related media and content.”

That statement was part of a broader community petition. Soon after the petition went public, the AUDL sent a letter to their players to highlight their plans for improving gender and racial equity, including producing 7-9 women’s games in 2018, increased exposure of women on social media, and 50%+ female clinic instructors at youth clinics.

All of those developments led us to the partnership review that I described above.

End of a Chapter

Regardless of the reasons for the Riptide’s departure, we do appreciate the positive contributions provided by AUDL Riptide and MLU Nighthawks to ultimate in Vancouver over the past 5 years.

The VUL worked in partnership with both professional teams, and they were staffed and rostered by many long-standing and dedicated members of our community. On behalf of all of us here at the VUL, thank you to everyone who participated to help promote ultimate, provide quality entertainment, and build new connections within the Vancouver Ultimate community.