Home » How to be a top spirited team!

Here at the VUL we notice when teams when spirit awards again and again, year after year. One of these teams is Chronic Injury, who play on Tuesday nights. The team has won countless R&B Spirit Kegs for the top spirit score on their night in a given semester. As well, several players from Chronic Injury have won the VUL’s annual male and female spirit awards. This summer, we asked the team captains to write an article about what they do that consistently gets their team so many spirit awards. Following is their article, written by co-captain Dasha Kvyatkovski. 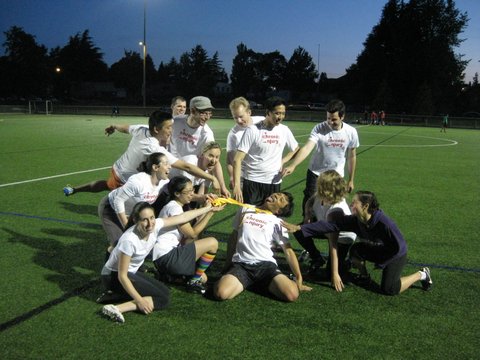 This is the shiny loud exterior of spirit that I enjoy and happily participate in every time I am on the field. Chronic Injury has been spreading this kind of joy for almost a decade.  It didn’t hurt that we originally budded off from another super spirity team, Random Fling.  Returning injured players were not finding enough room for themselves, and so they decided to form their own team along with some new players, and thus “Chronic Injury!” was formed.

It feels like every year there is some prize we get our injured limbs on. In almost every season we’ve won a spirit keg from R&B Brewing (who also happens to be our team sponsor too!) Some seasons we have housed very awesome trophies such as the individual spirit of the year award!  I believe we’ve been lucky enough to have 4 members of the team hold this award.

How do we do it? It seems that there are some things that make us happy when we play and that spills over when we play with others. When most people feel involved in how the team works then - it works! So, my job as a co-captain is to delegate, communicate and be generally loud. Our other co-captain, Cher Choi, does amazing things: organize the roster, invite players, and set up spreadsheets/attendance emails to ensure vacations are covered and so are injuries (sometimes our players can only play 1 game or need to sit off more points). She also brings snacks to the game, even when she is injured and cannot play herself!

Team members take turns bringing our sponsored R&B liquid to the game. Someone is always ready to set up the field. In my many years as a captain I have set up the field exactly two times! We have rule gurus, we have people who can coach our new peeps on the side. We strategize so that everyone can enjoy the game and learn new things. We try our best to be creative with cheers and notice and congratulate the opposing team on their plays. We even try to submit spirit scores based on group impression - each team member can e-mail the spirit score to me and then I average it out. So the scores we submit are not just my personal opinion. We try to check in with players as often as we can- Are you having fun? Are you playing enough? Do you need to sit off a point? The keys are communication, respect, and fun.

Finally, there are two favourite quotes to remind us that competition is not war:  We love this one from Travis and it makes us smile: "I am not angry with you, I am just calling a foul".  And the second, "We are opponents, not enemies".  When we look to see who our opponents are we consciously think that this is the team we will be playing “with”, rather than “against”.  And what’s a better way of spending a summer evening together than playing an awesome game of ultimate?!

Is there someone in the VUL that you feel deserves the honour of Most Spirited Male or Female? Nominations for 2014 are due Aug 29, and can be sent to nominations@vul.ca