This is the start of a regular Community Spotlights campaign, where each month we'll feature a VUL community member or team that is doing awesome stuff for ultimate in Vancouver. 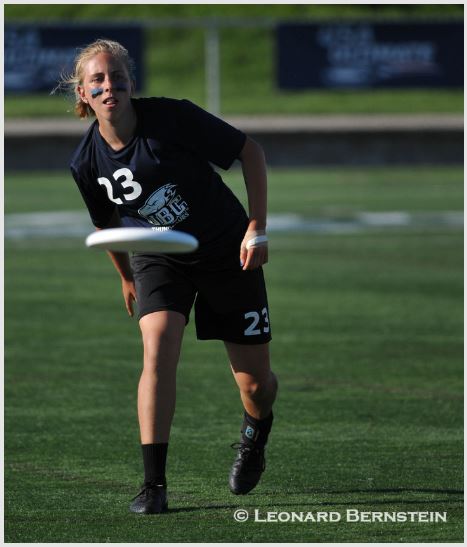 Brianne plays many roles in the ultimate community, including the amazing work she's done with the VUL to help revive Winter Parity League by making it a more gender equitable league via the 4 on 4 (2 m, 2 w) format.

Currently the backhand around break. For many years I’ve relied on my high release back hand to break, but the backhand around has more range. It’s a throw that coaches have been encouraging to use and so I’ve been really trying to push myself to work on and improve it over this last year, and as I get more confident I’ve found it opens up so many more options on the field.

Spirit of the Game and the fact that it is self-officiated are perhaps the more obvious attributes that make this sport special. Up until this year I’ve taken for granted that teams share and freely wander the sidelines, I struggle to think of another sport that does this. It allows for great sideline support and hype throughout the game, and gives the opportunity to mingle with opponents and have conversations / follow up about things that happen on the field. Spirit circles are another aspect I really like about this sport, it brings teams together and helps build a community, and lends a platform for talking about spirit issues that can happen in a game so that teams can grow and improve. Ultimate also has a very welcoming community, in my opinion; I have made so many new friends in the last year alone from participating in various leagues, events, and tournaments.

What does SOTG mean to you?

Spirit of the Game, to me, means respect. Respecting your opponent – accepting that they may have a different perspective than you; always giving them the benefit of the doubt that they aren’t trying to bend the rules to gain an advantage. Respecting yourself – it is okay to make calls when a foul or infraction occurs and stand up for yourself. Respecting the game – because the sport is self-officiated it is our onus as players to actively learn and review the rules so that we know them to the best of our ability; not intentionally causing a foul or infraction, and not contesting when it does happen.

Do you have an interesting ultimate related story to share?

At CUCs 2013 I was playing on the Vortex women’s team. In our game against Whiplash from Alberta I ran into my check from behind as she was catching the disc, pushing her from inside the endzone across the front line; it was unintentional but 100% my fault and a classic force-out foul. I immediately apologized and we both agreed it was a goal, however we had observers that game and he was calling it “not in”. We were both pretty confused as to what to do, because from both our perspectives I had forced her out of the endzone after she had already caught it, but observers actively call lines and he wasn’t allowing the goal to stand. So she got possession of the disc on the goal line, and before I tapped it in I asked my team to not move so that she could make an uncontested throw to a teammate for a goal. I think the coolest part of this story actually comes 5 years later when we officially met for the first time and ended up being teammates.