Every spring we offer skills clinics in the lead-up to our summer league, with curriculum developed by Jen Nicholls. With no games permitted yet due to social distancing measures, we feel extra fortunate that she continues to helm our clinic program, since we are running a lot more clinics this summer! 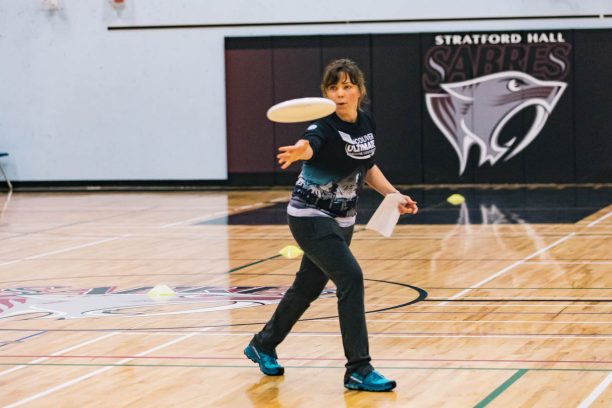 Learn a bit more about this elite player-coach: her favourite throw (and why), her storied time with Team Canada, her tips on how to practice meaningful throws, and that time she could have set a slip ‘n slide record.

What do you enjoy most about teaching ultimate to others?

I enjoy watching when players have their break-through "ah-ha" moments and come into their own as players. Or as a player figures out a skill. Or as the team figures out how to connect on a play.

What makes this sport so special?

The spirit clause in the rules where competitive play should never sacrifice the mutual respect between players. For me, that meant working on going from 100% adrenaline to 100% calm rational logic in seconds when there is an on-field call. I had avoided team sports as a kid because I couldn't understand that balance. Ultimate, and specifically the spirit clause which played out with my teammates and opponents, helped shape me as a young adult.

I have a number of favourites for different reasons, but a personal favourite was at a wintery University Nationals in Winnipeg. I was playing deep in a zone-D and anticipated a throw to the O mid-way up the field. I committed to the bid. I did a layout around the right side of the O with my hand curving around to get in front, made the D, and then (because there was a layer of slushy snow on the ground) slid off the field for quite a distance. I think it's a favourite because 1) it was a big lay-out for me, 2) the team had been playing so well all tournament, 3) we didn't let the weather bother us, and 4) I slid soooooo far! Seriously, I believe I set a slip n' slide record.

Tell us about some of the ultimate accomplishments you're most proud of.

What's a skill you continue to work on?

I've had to adapt my role over the years and currently focus mainly on throwing. To that end, I'm more likely to be found doing a 90 minute throwing routine than sprints (although also important). I also find that weight lifting, agility and balance are an integral part of being able to throw what you want, when you want to.

What first drew you to coaching?

Necessity probably initially drew me to coaching, followed by confidence, enjoyment and skill development. I started playing in the prairies, and the recruitment of new players was essential. What gave me the confidence to coach, and also the desire to pass the skills along, was previous waves of players who took the time to coach me, such as Kari Bauer, Anja Haman, Steev Limin, Joey Fong, Greg Liburd, and many others. I also give thanks to having the opportunity to be a pick-up on Team Canada starting in 1998 which gave me more skills and drills to bring back to my local ultimate community.

How do you instill Spirit of the Game in others? 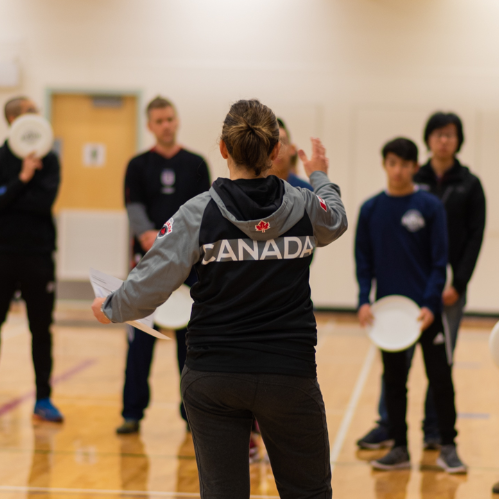 There are a number of ways, but for me, and this may sound odd, instilling spirit includes things like avoiding throwing "hospital passes" - those floaty, hanging throws that allow a number of catching-players to gather below for a gladiator-style disc-grab. Thus, I emphasize that players make a meaningful throw and practice their throws with the intent to avoid injury. Think about what kind of potential harm a throw could do to teammates or opponents, then adjust the throw. For example, aim to throw a directed throw to your teammate, that floats as much as needed, not with wild abandon to throw deep. This can be accomplished by:

What is your favourite throw? Or, what is a throw everyone should try to perfect?

My backhand hucks have gotten me out of a few tight spots, but my favourite is probably a 30m scoober. I've only ever used it once (maybe twice) in gameplay. It is my favourite because I worked hard to be able to do it. I would also put 10m scoober in the favourite as it's a great end-zone break throw.

Everyone is a little different, so I recommend picking a throw you enjoy and then work on an aspect of perfecting that throw. Often, a player's idea of a "good" throw is defined by distance, but I encourage you to think of other ways to define it. For example, it is the right edge, is it a break-mark throw, is it a low or high release (relative to you), does it break every zone cup?