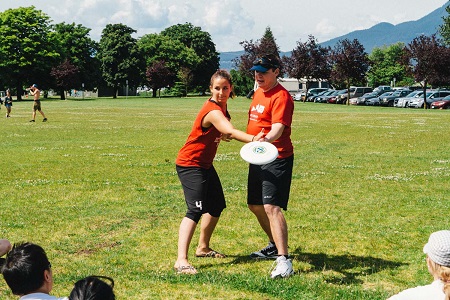 We offer several clinics and camps throughout the year.

For any clinic or camp, bring a water bottle, cleats (or runners if you don't have cleats), as well as a light and a dark jersey/shirt.

We frequently hear from participants that our clinics are top notch. Our two objectives for each clinic are that:

Clinics are designed by long-time player and coach, Jen Nicholls. Jen started playing in 1995 and attended her first Canadian Ultimate Championship (CUC) that same year. She was first selected for the Canadian Mixed team in 1998 and has been a part of Team Canada over a number of years and across a few divisions. Jen leads many of the clinics first-hand and brings in special guest coaches for large clinics or when she's unavailable.

A special clinic designed for people who've never played ultimate before. Give it a shot! Usually held in April, January and August/September. See the calendar to sign up!

We host multiple clinics on a variety of topics during the year. Typically these are run in April & May for Summer season, August & September for Fall season, and January for Winter season. See the calendar to sign up!

The Summer League Camp is the best way to learn to play! It runs during our summer season and includes extensive clinics and a series of fun games.

Spring Bootcamps for Intermediate and Elite

We run two camps in the spring: