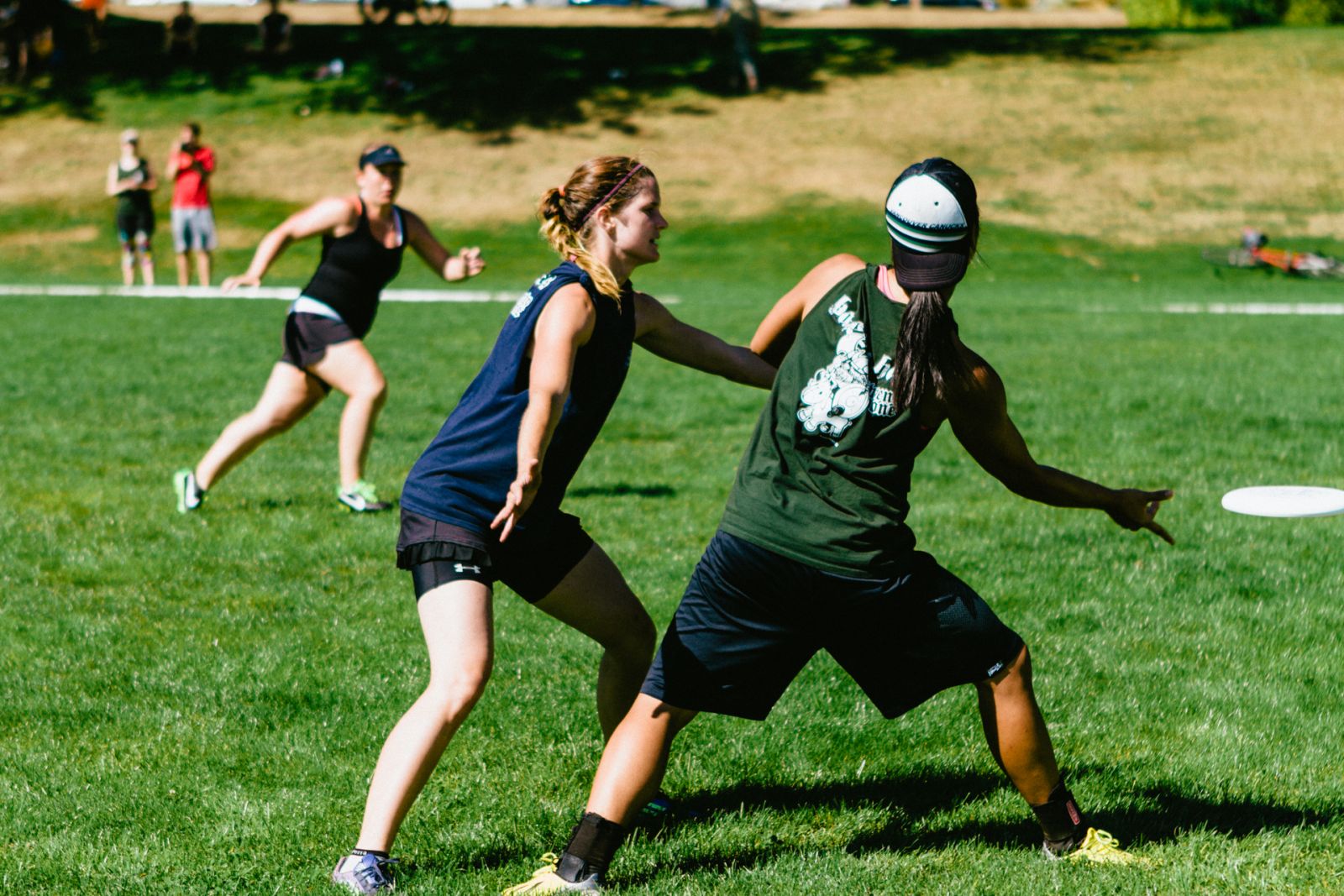 Handlers are two or three people on the field who are designated to be responsible for throwing and moving the disc. They are often the more seasoned or confident throwers. Generally speaking, if you are a handler you: 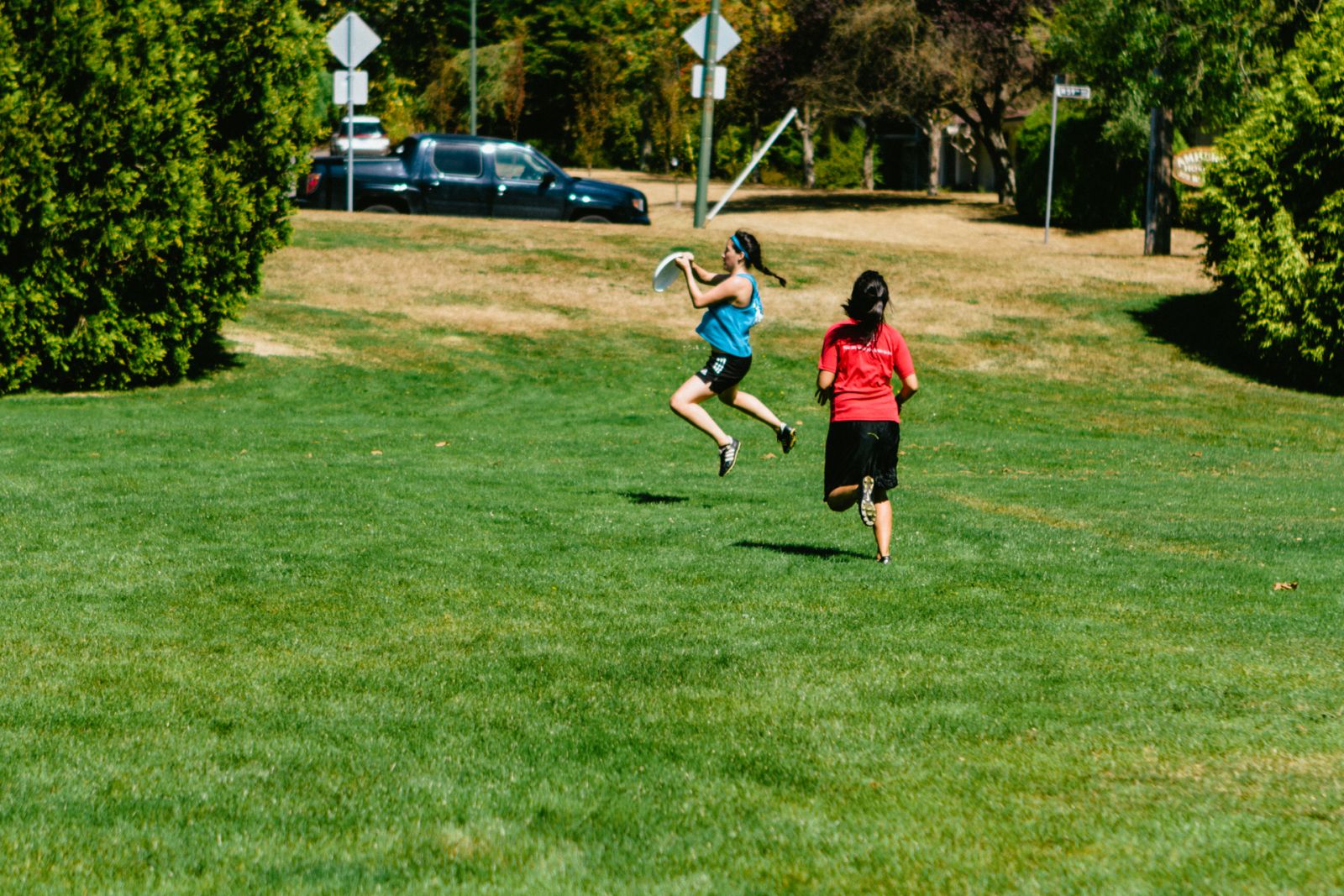 Cutters are those who do most of the running up and down the field. Their job is to create options for the thrower by cutting to open space and then throwing to the next cutter or a handler once they receive the disc.  Creating space for other cutters is as important as getting the disc yourself. Cutters will generally line up in a vertical or horizontal stack.

If you are a cutter you:

With 14 players on the field at all times, ultimate games can sometimes look like complete chaos – and often they are!  Playing a structured offense:

The two most commonly used offenses in ultimate are vertical offense and horizontal offense...

Vertical offense has a straight-forward structure that is easy for new players to learn. It is also easily adapted by teams to create more sophisticated offensive plays.

Vertical offense typically comprises of 2 handlers and 5 cutters. You’ll mostly set up in vertical at the beginning of a point or after a turnover.  The first player in the vertical stack stands 5-10 yards from the handler with the disc, while the other cutters stand in a vertical line behind that first player; there should be about 3 yards between each person in the stack. The other handler should stay out of the way of the play, on what we call the break side. This will allow cutting lanes to remain open for all the cutters in the stack.

The following graphic will give you a better understanding: 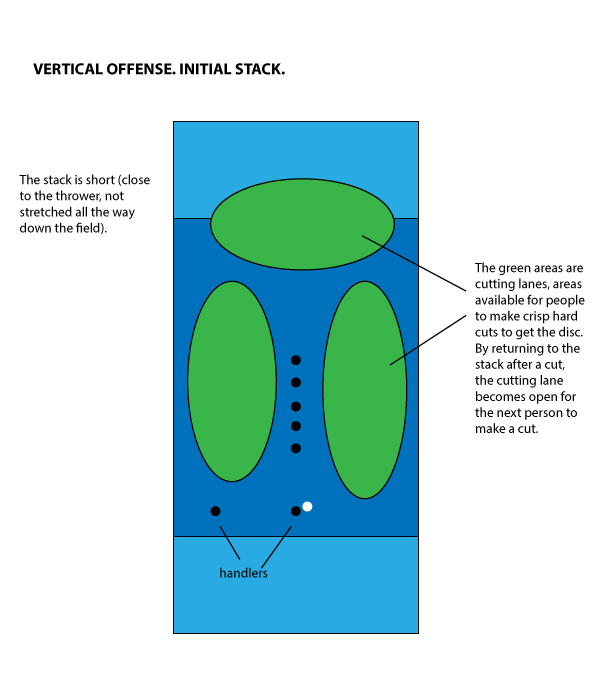 The goal is to move the disc down one side of the field. When that starts happening, the stack should adjust to create more space on that side by swinging the back of the stack over to the opposite side of the field.  Once momentum down that side stops because there are no longer open cutters , the new goal is to re-set the disc to a handler in the centre of the field and the vertical stack returns to the centre in order to create more options again. Remember to always make safe cuts that avoid risking injury to you or other players!

In reality, it’s often messier than that. Cutters don’t always get open and throwers don’t always feel like they can throw the throw that’s needed. That’s why at about stall 5, throwers need to stop looking upfield and make the decision to dump it to one of the handlers. This is a handler responsibility: they need to get open promptly for these critical dump passes in order to reset the play. The stack adjusts to the new handler getting the disc and the person who threw the dump clears out and gets back into the stack – unless the person who threw the dump was a handler, who returns to the break side handling position.

At the end of the day it’s about being able to adapt on the fly, communicate with your teammates, and keep working hard to make the play happen. 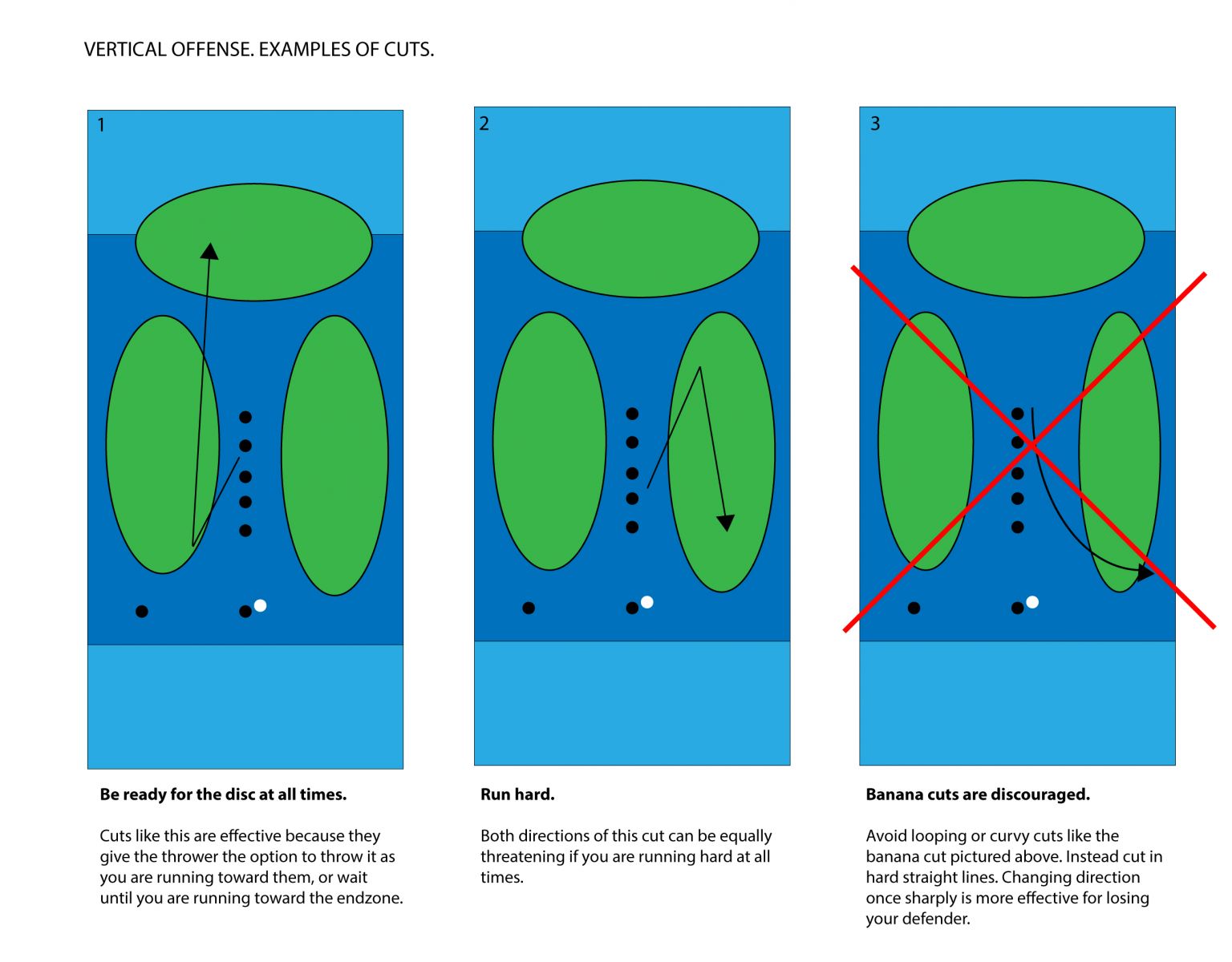 How it comes together

There are a lot of moving pieces and many things to remember. You should read this page over and over as you continue playing, putting the skills into practice. When everyone on your team works together to advance the disc, it looks like a well conducted orchestra.  For a moving graphic of what vertical can look like, follow the link to the Ultimate Handbook.

If your team has throwers who can consistently throw long passes down the length of the field (called hucks) then the horizontal offense can be an excellent strategy, as it is designed to provide plenty of both long and short throwing options.

Horizontal offense is structured to create space in the middle of the field, unlike vertical which looks for space (or cutting lanes) down the sides of the field.

There are three handlers that line up horizontally across the field. The middle handler should be close to the centre of the field and have a handler 10 to 15 yards on either side of them.

The four cutters are 10 to 15 yards downfield from the handlers; two on each side of the field. 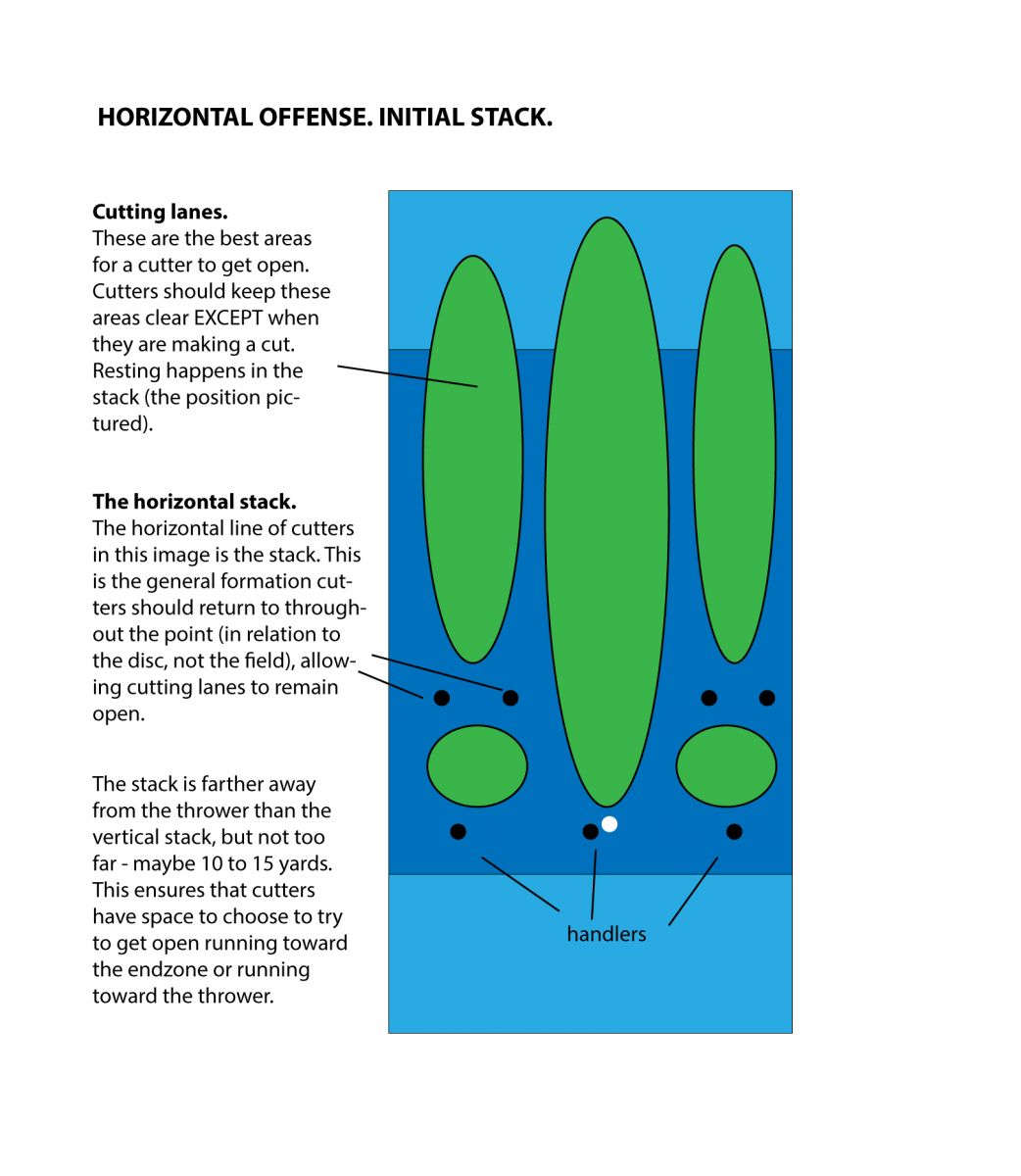 In horizontal two or more people can be making cuts at once, and if the cuts are effective this can create two or more viable options for the thrower. Assuming handlers have the ability to throw all of the throws, a team can truly take advantage of whatever the defense is not defending effectively. Remember to always make safe cuts that avoid risking injury to you or other players! 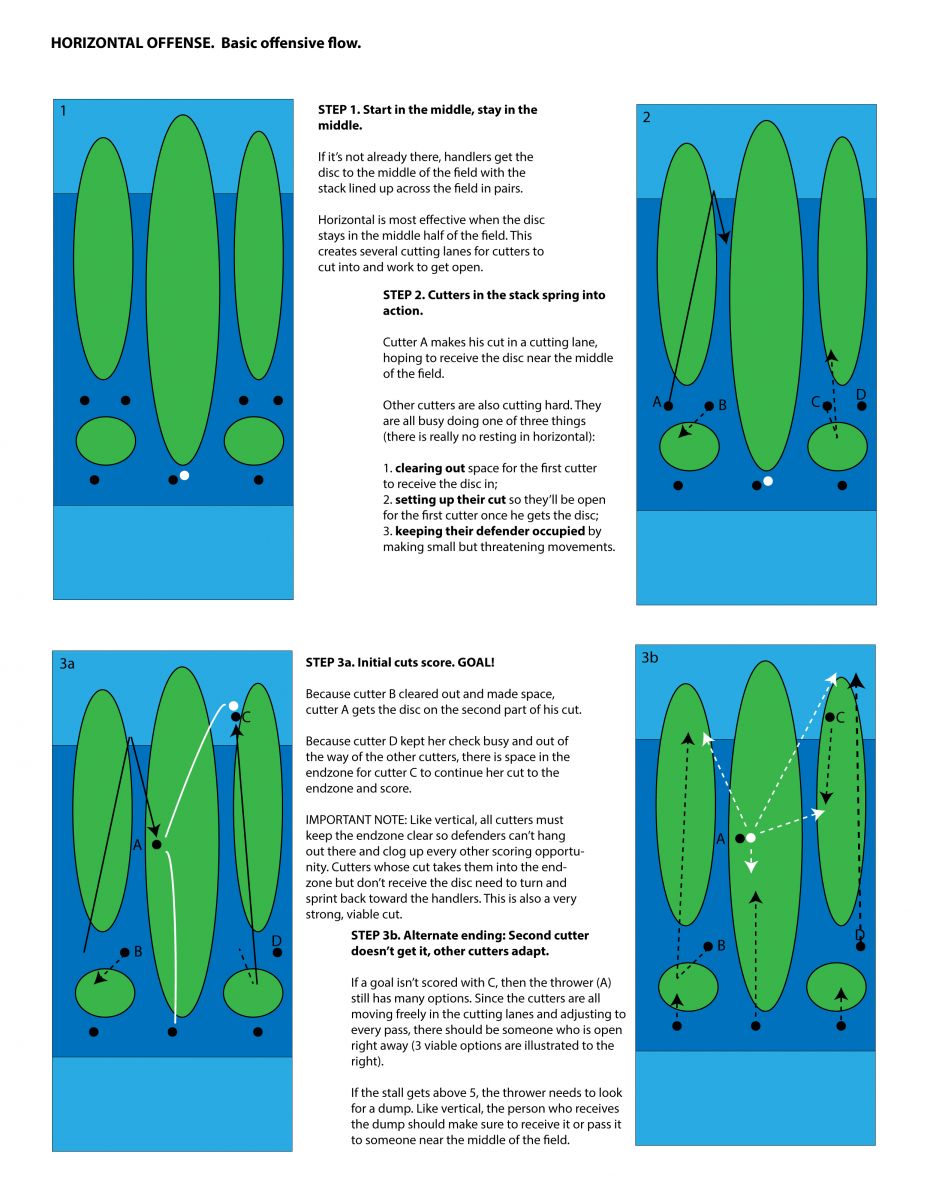 In reality horizontal offense can look messy. But horizontal has the advantage of being more easily adapted, since it is designed to create two or more viable options for the thrower at all times. There is more space for cutters to continue to cut even if their first one doesn’t work out, so in theory there should always be someone open (or nearly open) even when the disc gets passed around a little by the handlers.

Again, communication, adaptability and hard work are what makes the difference between a team that wins the tough points and the team that loses them. 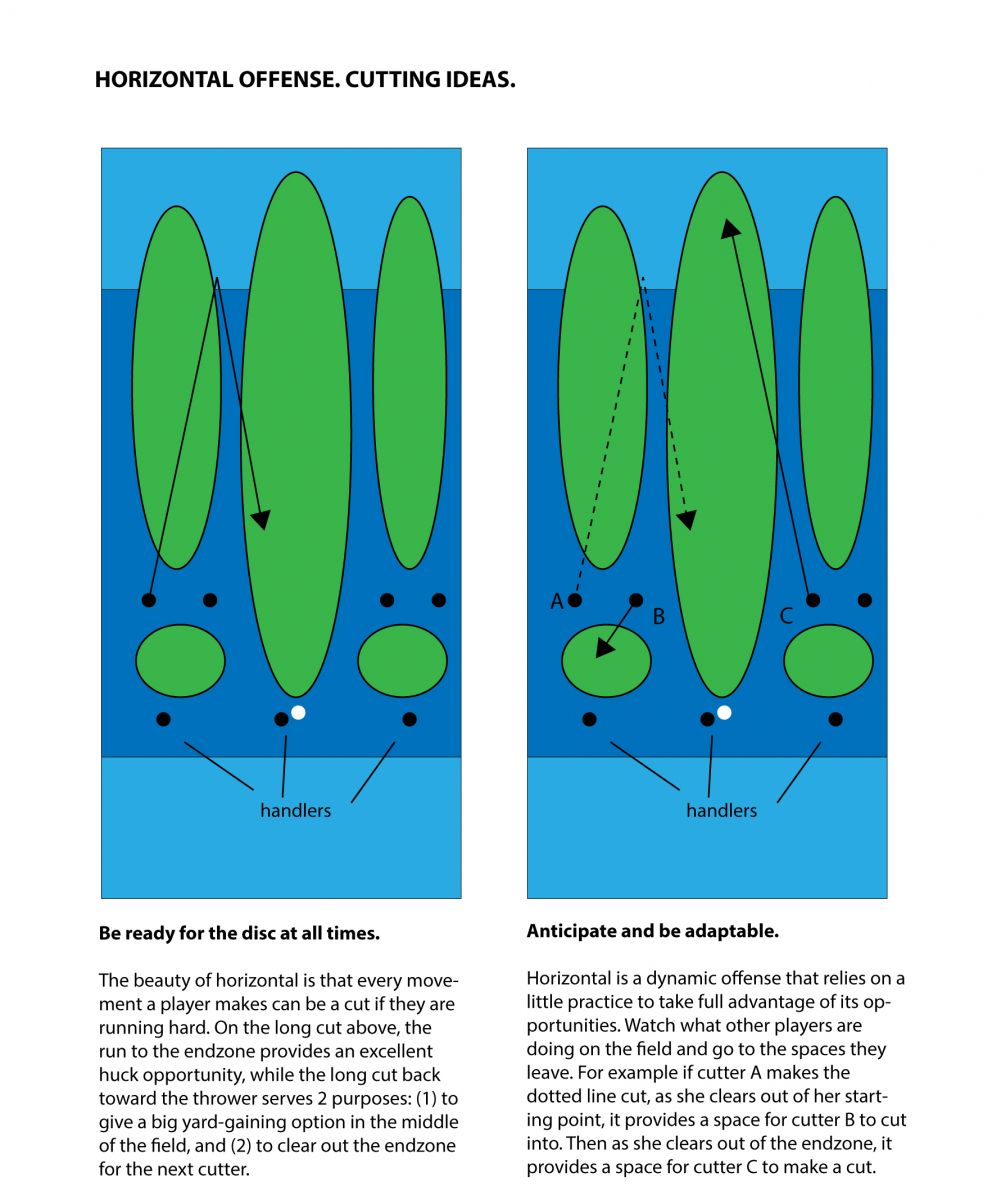 How it comes together

There are a lot of moving pieces and many things to remember - even more than in vertical. You’ll likely need to read this over several times as you continue playing to fully understand all the concepts. For a moving graphic of what horizontal can look like, follow the link to the Playspedia.