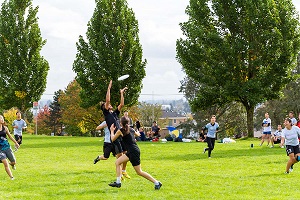 Ultimate is a fast-paced, non-contact field sport. It’s suitable for players of all ages, and usually played in a co-ed format with players of all genders on the same team.

According to USA Ultimate, the sport is played in more than 80 countries, with the largest number of players in North America. There are over 30,000 recreational players in Canada alone, and an estimated 7 million+ world-wide!

All you need to play is a disc (frisbee), some cones, and a playing field. Games are typically played with 7 players a side, but there are many variations. The most unique aspect of ultimate is that it's self-officiated - players make all calls themselves - even at national and international championships!