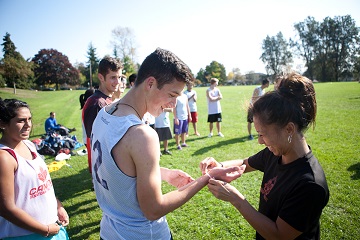 There are many reasons why so many people choose to play ultimate:

There’s just something especially awesome about throwing a disc and watching it fly... or chasing one down and reaching to grab it at the last second, all to the roar of your teammates.

The friends you don’t know you have are waiting!

Whether it’s your own team, or the team you’re playing against, you'll meet a variety of great people. Ultimate has a strong community because games are played with sportsmanship as a top priority, and most leagues are co-ed. Stories of long-term friendships and relationships that developed through ultimate are abundant.

Running and smiling are both good for the heart.

Getting outside and breathing hard for an hour or two is a great way to stay in shape. Doing so with your friends is even better.

You need a very little equipment to play ultimate: shorts, shirt, cleats, and a disc. That’s it!

There’s something for everyone.

In the VUL, there are a wide variety of options to play ultimate that will appeal to different ages and skill levels. We operate adult leagues and youth leagues in several different formats other than the traditional 7-on-7 game. We offer skills clinics & camps, as well as social events and tournaments to players of all levels, from brand new to national caliber.

Play to win, but play within the rules.

Ultimate is different from most other team sports in that it is self-officiated. We play with no referees, and players are responsible for making all calls themselves. This means respect, communication, integrity and sportsmanship are very important parts of the game. In other words: play to win, but play with respect and within the rules. For more, read about Spirit of the Game.

Ultimate is a sport that cares about inclusivity. There's plenty of work to do, but positive steps are being made in the sport. We've long been investing programs and resources into women in ultimate. In 2017, the VUL became one of the first leagues in the world to change it's policies to be more inclusive of trans and non-binary players, and we proudly welcome LGBTQ2+ players.

If you like playing Ultimate, and start to get quite good, playing at Provincial and National championships may be within your reach. Since ultimate is a fairly new sport, there are greater opportunities to play at a high-level than other sports. Vancouver is also a hub for elite ultimate: our city has produced teams that have competed and won at numerous National and International championships.