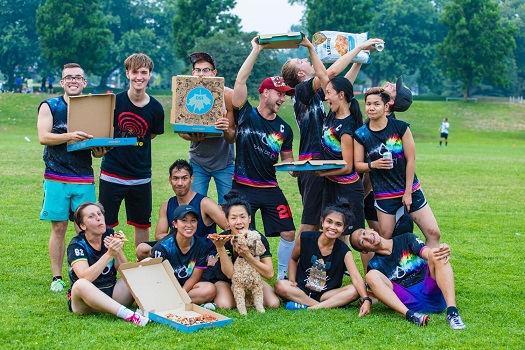 The VUL welcomes players of all genders and sexual orientations!

LGBTQ2+ is an acronym that stands for Lesbian, Gay, Bisexual, Trans, Queer & 2-Spirit. The + denotes that there are many other identities and communities within the LGBTQ2+ population that are not represented in these six words.

In 2018, the VUL and Rain City Ultimate partnered together to run a workshop at the Ultimate Canada Conference called 'How Can We Make Ultimate LGBTQ2+ Inclusive'. About 40 people attended and came up with several ideas on the topics of team culture, league policies, organizational culture and communication. See the google document of notes and add other ideas of your own for leagues and organizers to draw from.

The VUL teamed up with Rain City Ultimate to create Pride Stickers. Other ultimate organizations may use this design and replace our logos with theirs. We want to see these stickers spread!

Rain City Ultimate is a separate organization from the VUL that was created for LGBTQ2+ ultimate players and allies in Vancouver. Rain City runs practices, clinics and teams (that compete in VUL leagues and tournaments). Read more on the Rain City Ultimate website and Facebook page.

There’s an active Facebook group for LGBTQ2+ ultimate players to connect and play tournaments together.

If you have a resource to be added to this page, please contact our Marketing Manager at mm@vul.ca.