This month we're highlighting the three organizers of Beach Ultimate Pick-up in Vancouver - Trisha, Dave and Zeca. For more info on how to join them, see their Facebook Page. (Note: Beach pickup is a non-VUL event) 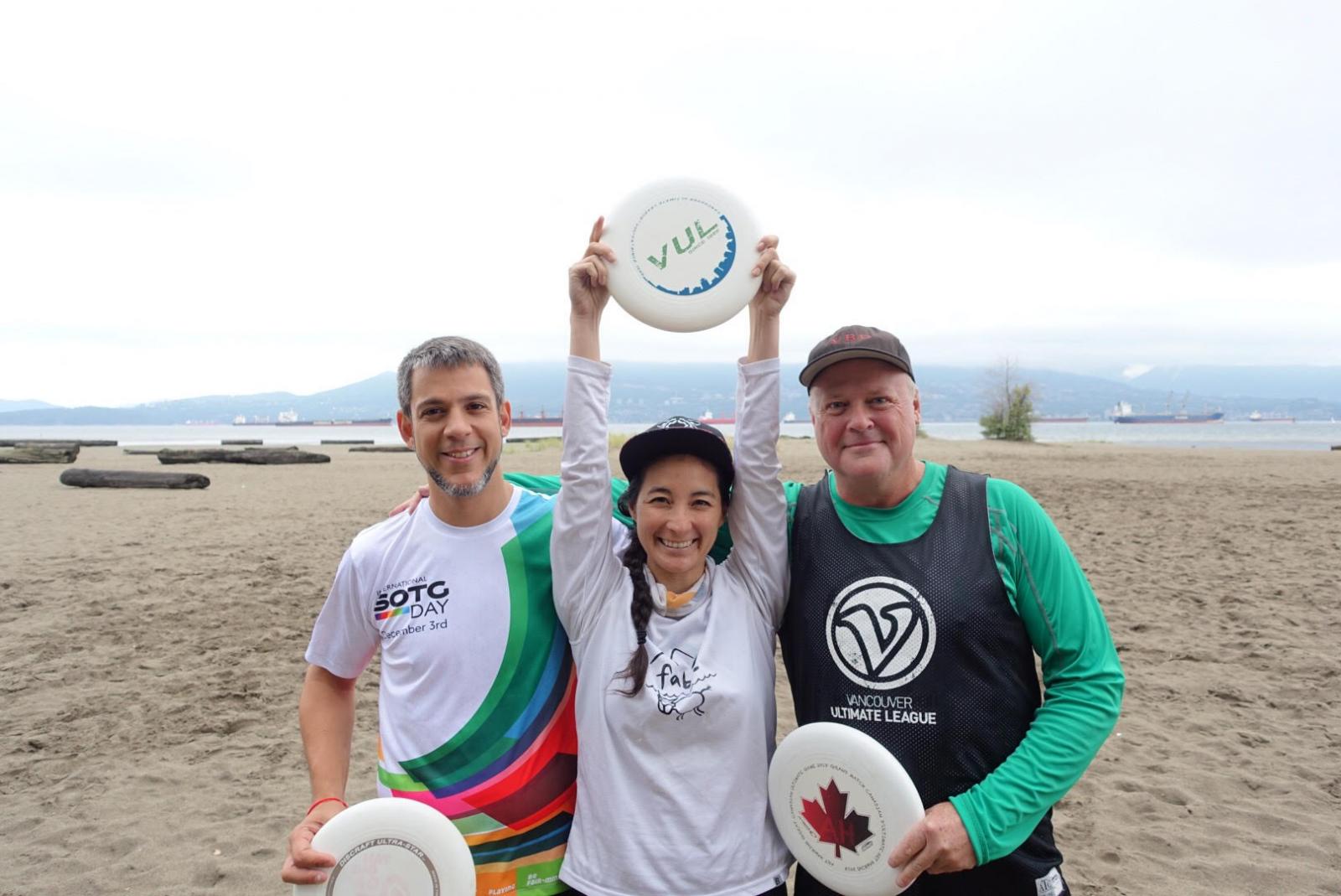 How many years have you been involved with ultimate?
4 years...

I got really serious about ultimate in 2013. I went to a small school so I joined the Open team, Aftermath, and eventually ended up captaining. I’ve been hooked ever since.

What's the main team(s) you currently play on?
Fable! I helped found the team in 2017 (and Mastadon, and Mola Mola in 2018) and have been captaining the last three years. #itsmixedultimatebringmoreladieswearegoingtoplay4ladies

What’s your favourite throw?
I’m particularly fond of my lefty io break huck. It sits so nicely and the breakside means my teammate has a big advantage.

How many years have you been involved with ultimate?
5 years...

I've been playing ultimate since the summer of 2014. I was introduced to ultimate by a couple of friends who I played dodgeball with. Since then I've stopped playing dodgeball and have taken ultimate as my main and most devoted sport. I play all three outdoor seasons, with 5on5 and beach (of course!) being my favourite versions of the game.

What's the main team(s) you currently play on?
This summer I wasn't rostered on any teams as a regular player. I spent the summer subbing on many teams and playing with many new players I had either not met or hadn't had a chance to play with previously. It's been a great experience! The culture in the VUL is so welcoming. My first 5 years playing in the VUL was spent playing mainly with "Local Pint", one of the most spirited and welcoming teams I've had the pleasure of playing with.

What’s your favourite throw and why?
Anything but the hammer… LOL! Actually I like my flick throws, I've practiced many many hours getting those throws to a competent level. So much so that my backhands have started to suffer a little. I'm pretty sure I can now throw further and more accurately with my flicks.

How many years have you been involved with ultimate?
Almost 3 years...

I found out about Ultimate in Brazil and played for there for a year before moving to Canada.

What’s your favourite throw and why?
Backhand breakside (when I can pull it off decently!). Been working on it as it creates a quick dynamic change on the field, helping my teammates with more options.

When did you start beach ultimate pickup?
We began the pickup Spring last year and stopped around Fall, then started it again this Spring better prepared. Our first summer (2018) hosting beach ultimate was a very different experience than this current summer (2019). Our first summer there were small numbers but we believed in the opportunity and this year has really shown the potential for Vancouver Beach Ultimate.

How did the idea come about?
When I (Zeca) arrived in Vancouver, I was surprised there wasn’t Beach Ultimate considering the huge amount of ultimate players and good beaches.
Last year we found a few players that did Goaltimate at the beach once in a while, and me and David came out to play, but we wanted to play more beach, so we started hosting ourselves. My home town has a for-fun pickup every Sunday and I thought the idea could work here. We started spreading the word of our beach pickup and this year a friend of ours, Julianna Jee, suggested we make a Facebook page and it just took off.

What has attendance been like?
This year has been amazing! Just blew our minds how many people have been coming out, I think we hit 30 people one day and had to setup a second field. One of the most interesting aspects has been people visiting the city showing up: Germany, Ireland, Australia, England, etc. They find us on Facebook and/or Pickupultimate and show up. If the person is new in town, we introduce them to other people, add them to whatsapp groups and soon they are playing VUL or tournaments - we’ve had people that moved to Vancouver 2 days before Life’s a Beach and they joined our team in the tournament.

The beach pickup really surprises in unexpected ways sometimes because of the people that come out and play. You never know who will guest star at beach - we often have players from around the world, and local players who’ve played on the world stage. It has been an amazing experience for everyone, especially some of the younger women that get to play with/or against experienced women on the sand.

When and how can others join?
Join our Facebook page or just show up! It’s open to all! We play at Spanish Banks every Tuesday and Saturday from 10am to noon.

Why Tuesdays at 10 am?
Not everyone works a 9-5 schedule! This is an untapped market with folks hungry for ulti: the stay-at-home parents, the flex-time workers, the funemployed, students and teachers in the summer, etc. Why not spend some sunny days on the beach chasing plastic and enjoying what beautiful Vancouver summers have to offer? (Or, the fading summer light throughout the fall). Tuesday morning specifically is an artifact of Sarah Cawston-Stewart’s schedule at the time. She was a driving force for starting the weekday pickup game being an early adopter and organizer.