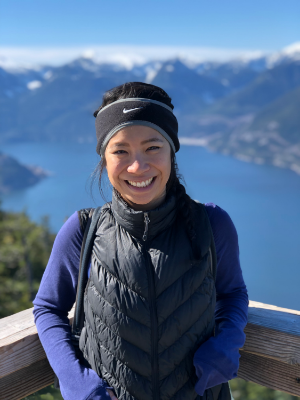 Shannon is a long-time VUL member who does amazing work on the ground for the sport of ultimate in Vancouver. She's a dedicated coach working to instill the principles of SOTG and gender equity in her youth team. She lives what she teaches, having been nominated for an annual VUL Spirit Award multiple times and received the Laurel Stroppa Atwood Spirit Award in 2015.

Who have you learned the most from in ultimate? What did you learn?

When I played on the UBC women's team, I played for 4 years under coaches Bridget Gilbride and Val Dion for one year and Steph Chow for the other three.  Steph especially had a huge impact on me as being the first Asian female ultimate coach that I'd ever had.  For the first time, someone understood the values and regimented rules that came from my family.  She was a strong, bold, fierce and passionate role model who was unafraid to express her opinions, show her emotions and live each moment vibrantly.  She invested her time in me and believed in me and so, under her leadership, I grew to be an empowered ultimate player.  I did not know at the time, but those years with UBC women's formed much of the foundational values that I still believe to this day. My career as a teacher now gives me even more opportunity to inspire and empower others, in both my classroom and when coaching.  I recognize that I am in an ideal position to pass forward the amazing gifts that I had once received.

I am most excited about the new gender balance rule that Ultimate Canada has implemented.  I work in the Surrey School District, the largest school board in BC and known for its innovative priority practices.  We are often at the frontline of teaching and learning for our many students, and it is no different within our high school ultimate league.  Since the league meeting among all coaches prior to starting our season, we all agreed to make the change along with Ultimate Canada, and it is amazing to see the kids adjust.  It goes to show that the future is bright with these junior ultimate players who know so much more about balanced play than I ever did at their age.  Coaching in the Vortex program, it is also exciting to see so many other coaches who believe in similar values as me.  I love that they are passing on their knowledge to kids in the lower mainland, showing them how ultimate should be played and experienced.

As a coach, how do you instill SOTG in your players?

I instill SOTG in my players by explicitly teaching them the complex ways that spirit can be ingrained in sport. I tell them that ultimate is life...literally. There are times of conflict, times of failure, times of joy, times of intensity. Throughout it all, we must hold ourselves to high standards. If we make a mistake, we own up to it and apologize. If we are too intense, we take a moment to breathe first, then make a decision. We discuss fairly, respectfully, and calmly. We consider others' points of views, giving them the benefit of the doubt. Throughout it all, we play competitively...but we still have fun while doing so.

We know you've done some great things for gender equity in ultimate. Can you tell us a story related to that?

I coached an intense ultimate season with last year's high school team.  Despite sharing our team values of including to everyone, throwing to everyone, we had an interesting makeup of our female roster.  Most of the girls were new and most of the new female players were in grade 8.  Most of the experience came from the guys and they were mostly in grade 10.  Already, this created a huge imbalance in skill, experience and confidence.  I realized that what I was doing was not enough and I had to break the team down to work on our core and rebuild back up.  I had to have separate in-depth conversations with each of our captains and get them to critically think of the team and its future.  Then I scheduled two girls-only practices.  I found out that they had completely lost their voice and didn't even want to receive the disc anymore for fear of upsetting the more experienced players.  My heart broke a little when I heard that.

In our girls-only practices, we focused on finding their voices again.  I had them do a simple throwing and cutting activity in pairs, but every single time they passed the disc, they had to yell out their partner's name or issue a phrase to communicate a directive (ex. Keep going!  Cut in!  Go to!).  Every single time someone received a pass or was cutting, they had to yell out in communication as well (ex. Yeah yeah!  Yup!  I'm open!).  Throughout the rest of our practice, we continued with this activity of explicitly using communicative phrases.  At the end, I had them create a cheer to remind themselves of these sessions and the lessons that they learned. They created the B.O.O.T.I.E. cheer based on the words: Brave, Open-minded, Optimistic, Trustful Inspired, Empowered.  They cheered this cheer to remember their voice, presence and place on the field before each game.

Following this season, I had all of the beginners join the junior club program, where they had a chance to not only compete, but to work on improving and advancing their skills in a safe inclusive environment.  They have returned now for their second school season and they have all become leaders on this year's school team.  For their second club season, many of them are either on the top regional team level or have made it onto the touring teams in the program.

This is an experience that I will never forget.  I learned many things myself as a coach and as a captain of our own adult recreational team.  I've found out that even though as leaders, coaches and captains, we have ideas on how our team should be at its core, we have to be explicit about what we mean and how we want to achieve and carry out these values each time we are together.  Our summer VUL team is formed on having players join us from mixed skill levels.  We ask everyone on the team which positions they want to play.  We encourage everyone to pull the disc, no matter how far it goes.  We strike for everyone, then cut back if needed for a huge gainer.  We focus on fun before winning games.  We celebrate when we have points where we have our women dominating the play.  We advertise VUL skills clinics for everyone to improve.  We host pre-season games before the season starts and have hangouts throughout the season - whether it is a quick dinner after the game or an open invite to a team gathering on a weekend.

As captains, we have our own group chat where we ask each other questions to help ourselves improve in our own learning of leadership.  We solve problems and conflict in a fair and welcoming way.  We stay open-minded and are always ready to learn.  We also ask reflective questions to our team on our team chat to involve them in the process of giving everyone a voice.  As a female captain, I always make sure that my voice is heard so that there is representation for other female players.

I believe so strongly in giving everyone a voice and empowering and inspiring those who are oppressed to speak.  I think that we sometimes need to challenge others to bring them a little out of their comfort zone so that they can grow and improve.  I am involved in coaching both school and club teams from grade 4 to 12 for this same reason and hope that change will continue to happen.