On the first Sunday of each month we feature a VUL community member who is contributing to ultimate in awesome ways. 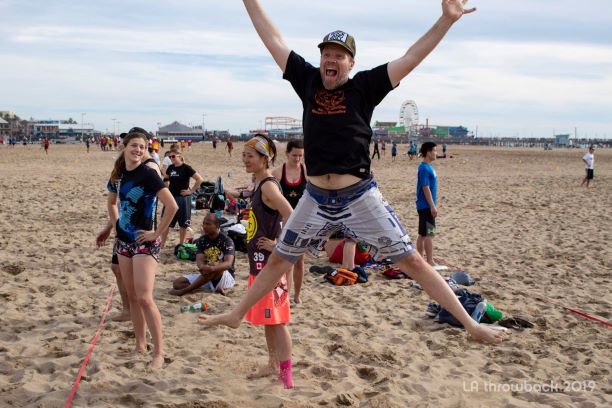 Pete McCann is a guy who builds community. He can’t help himself - it's in his soul. Just like his love of music and great food. And road trips. Like his annual Austin City Limits trip or his Massive Rooster mid-winter LA get away (in pre-COVID times). If Pete’s involved - and he usually is - you know everyone will be laughing, playing, and eating well. If an ultimate event looks to be possible, he’s in, whether it’s goaltimate, beach, grass, 5-on-5, lawn bowling, or nationals on grass. If Pete is there you know it’s going to be epic fun (there might even be a Pete piñata). And when the community needs someone to step up he doesn’t hesitate, from "orphan dinners" for the holidays to finding a place to be together to remember our dear friend Craig Kulyk. With his skills and cheery spirit, and more than a few cold and wet winter league hat games, Pete is the glue that pulls us together and makes it seem effortless. - Intro courtesy of Anja Haman

Disco Bananas, No Toque El Mono, Massive Rooster, and many others

Captain, player, club player, past VUL board director (as president for 2 years, and board treasurer)

What does Spirit Of The Game mean to you?

A lot of people think that SOTG simply means sportsmanship. I think that is only part of the meaning. While playing with fairness, ethics, respect and a sense of fellowship certainly applies to SOTG, it also means that each player on the field is responsible for ensuring to the best of their ability that everyone else on the field comes away with a satisfactory experience prior to, during and after the game. That means including everyone in the game play regardless of gender, race, sexuality, or ability. It also means approaching disagreements calmly with understanding, playing a safe game to the best of your ability, being self aware of the impact your actions/play may have on others, and remaining positive/supportive with everyone.

Do you have an ultimate related story we can share about Spirit of the Game, gender equity, or inclusiveness?

A while ago I was playing on a winter hat league team with a fair number of beginner players on the team, most of whom did not know each other. You could clearly see that some of the players were new to the sport and were struggling with throwing and what to do on the field. I tried to be positive to everyone each week and try to give some playing tips. At the end of the season, one of the new female players came up to me and thanked me for throwing to her all season long and making ultimate fun. I don't know why, but I was a bit surprised to get this feedback and I was also very touched by it. The only thing I could think of to say in response was that even though she was new to the sport, she was working hard and deserved to get the disc like everyone on the field. If she didn't get the disc, how else was she supposed to have fun and get better. I also said thanks.

Back in 2018, I played for Team Canada in the Great Grandmasters World Beach Championships. It was essentially a pick up team from across Canada who assembled on a sunny April weekend in Santa Monica for a warm up tournament. We got killed that weekend, but we had fun and it was clear that the team was full of great people. After the humbling weekend, we went our separate ways and worked hard prior to the big tournament in June in Portugal. All the hard work paid off as we won a silver medal for Canada, behind those pesky Americans. It was the best group of people to play with along with the pride of winning a medal for Canada makes this my best ultimate memory.

Brian Gisel. He was a good player, mentor, and was president of the VUL when I joined the board. He probably doesn't know he even did this, but the biggest thing I learned from him was that everyone has a role to play on the field, regardless of whether you touch the disc or not. Each person is part of the team and no person can do everything, even a very good player.

The Hammer. It can have sketchy results but is always appreciated by the sidelines/crowd.

What are your thoughts on the future of ultimate?

I'm excited to see ultimate grow and become more widely accepted so that everyone can enjoy the sport which I love, maybe even be in the Olympics some day. I also fear a little bit that if it becomes too mainstream that it will lose some of the special community feel it currently has, and just become another sport. It is up to the current and future generation of players to make sure that ultimate remains a special sport that can be whatever you want it to be (competitive or recreational, but always fun and inclusive).